Both my brake lights were not functioning again. Before that the whole right cluster went dead; I fixed it by using little strips of kitchen foil stuck to the PCB where it met with the 8-gang connector. You need the precision of a watch repairer to do that correctly. But two weeks ago a Nissan 130Y driven by lady ferrying her kids to school almost rammed my rear end. Our bumpers touched but luckily no damage was done. I knew she couldn’t react quickly because only my third light was working.

So I decided to discard the troublesome PCB and hard-wire my tail lights. It took me two days to complete the project because I discovered the clusters had bulbs of the wrong wattage and it was too late to go and get replacements. The lights for night driving were fitted with two 10W bulbs on each side instead of a 21W and a 5W. Otherwise the job would had been done in a day at a leisurely pace. I am very happy with the results – no more bulb failure warning lights on the dash telling me something was wrong at the back.

If you’re going to attempt the same conversion, here are the stuff and tools you need and the way I went about it for guidance: 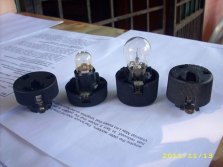 Bulb holder in the centre had their tabs cut off.

Open up your boot/trunk, remove the spare tyre and the tail light covers. Disconnect the black ground wires from the body and pull out the 8-gang connectors from the clusters. Remove the four 10mm bolts on each side and take out the tail light assemblies so you can work on them on a bench or table.

Remove the bulb holders. This is a good time to check if all your bulbs are working and are of the correct wattage. The top row holds three 21W bulbs and the bottom row holds one 21W bulb at the outer end and one 5W bulb at the inner corner. The hole in the middle of the bottom row of each assembly is meant for the rear fog light and is not used for our market, and it is fitted with a reflector lens on the outside instead.

Next connect the wires to female blade connectors for the top rows, three on each side. Use different colours if available and leave the other ends of the wires free. Shield the connectors with short pieces of shrink tubes or electrical tape as they are so huge they will touch the car body on top. Next connect two blade connectors in a series for the two lights on the bottom row; one set for each side. Make sure enough slack is given between the two connectors and leave the other ends free for the time being. That completes the supply side of the wiring and you should have four on each side.

For the ground side, connect another five connectors for each side in a loop going to each light and ending with a ring connector. You can buy a couple of new connectors or as in my case, re-use the black ground wires from the PCBs which already have the round connectors.

Fit all the connectors to the bulb holders and screw the holders back to the tail light housings. Bundle all the wires with cable ties or electrical tape and route them up nicely to one side. Trim the excess wires and crimp each end to a medium-sized male spade connector. Push each end of the male spades into the appropriate 4-gang connector body. You can arrange them in any order you like; I put them in order of how they are arranged in the cluster, i.e. brake, reverse, indicator and night/parking.

Open up the backs of the 8-gang connectors on each side in your boot, pull out the wires and cut the ends off. Leave the white wires ( two on the left, one on the right ) meant for the fog lights alone. You may want to keep the connectors and the terminals if you to switch back to using the PCBs in future. I don’t think I would. Look at the PCBs and trace which terminal connects to which light. Or you can rip just them off and use the guide below which is given in the order of left terminal number and wire colour, right terminal number and wire colour:

Connect each end of the wires to the medium-sized female blade connectors. Remember to crimp up the two black wires to a single connector on the left. Hold the two sides of the the 4-gang connector body together and push each connector end into the connector body until you hear a faint click as the barb on the connector latches itself inside the body.

Make sure that each connector from the harness matches the right wire that you fitted on the light assembly. Test your work and if everything works you should not be getting the bulb failure warning light on the dash. Mount the assembly back on the car – you may have to bend the connectors on the top rows to clear the bodywork – connect them up and re-fit the back covers and enjoy your brick! 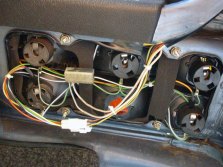 Update Dec 12: After posting this, I found that flags – blade receptacles similar to the female blade connectors but with the crimping ends at right angle to the body instead of straight – would be more suitable due to the bodywork getting in the way.

8 thoughts on “Hard-Wiring My Tails”